The Wagner Compendium - A Guide to Wagner's Life and Music 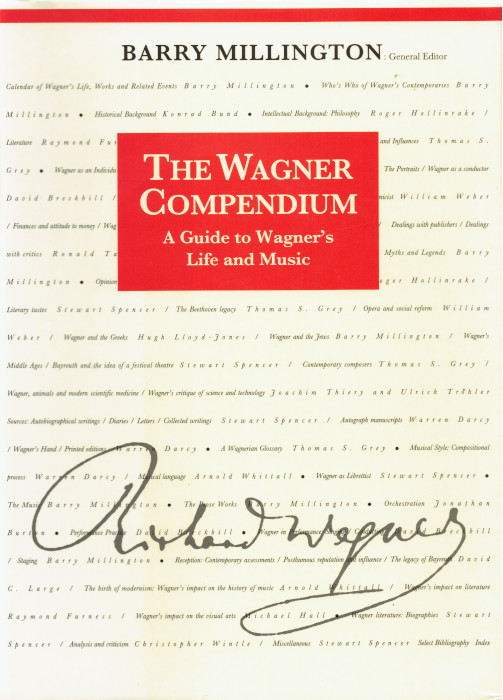 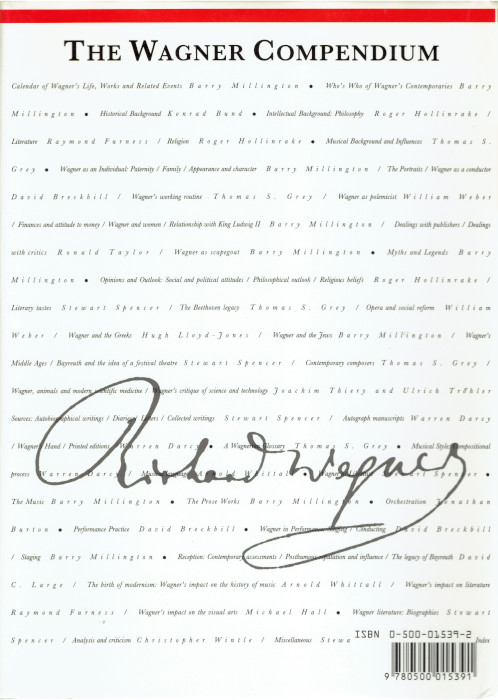 Barry Millington is Chief Music Critic for the London Evening Standard and founder/editor of The Wagner Journal. He is the author and editor or co-editor of eight books on Wagner, including Wagner, The Wagner Compendium, The Ring of the Nibelung: A Companion and Selected Letters of Richard Wagner, and also contributed the articles on Wagner and his operas to The New Grove Dictionary of Music and Musicians and The New Grove Dictionary of Opera. His latest book, The Sorcerer of Bayreuth: Richard Wagner, his Work and his World, was published in October. He was the founder and artistic director of the Hampstead & Highgate Festival (1999-2003), and has acted as dramaturgical adviser on Lohengrin at the Bayreuth Festival and on productions in Tokyo and Copenhagen; in 2008 he co-founded the ensemble Counterpoise. He is co-director of Wagner 200, a wide-ranging series of events celebrating the bicentenary of Wagner’s birth in 2013, and is known also as a broadcaster and lecturer.

An exciting departure in musical literature, already acclaimed worldwide, the Thames and Hudson compendia on composers embrace, succinctly and accessibly, the most authoritative current thinking on the great musicians and their work.

Wagner is perhaps almost as renowned for the controversy he inspires as for his music. His work and his attitudes have elicited both devotion and revulsion; his polemical writings and struggle to create the complete work of art, the Gesamtkunst- werk, have generated impassioned argument. His influence on music and on other disciplines has been incalculable. Amidst all the heated debate, there is a need for sound information on a figure often obscured by his own legend.

The Wagner Compendium employs the latest research to present a comprehensive survey of the man, his oeuvre and his times. The musical and intellectual background and influences which helped shape the Wagnerian canon are considered along with the historical context of German unification and the creation of Bismarck’s Reich. Wagner’s character, opinions, and his behaviour towards women and Jews — the principal sources of the notoriety which has dogged him – are fully examined, and there is a special chapter on ‘Myths and Legends’ wittily correcting the extraordinary misconceptions with which Wagner has become associated. The operas, orchestral and choral music are analyzed together with the lesser-known works for solo voice, the piano music, and the projected operas – intriguingly left uncompleted. Wagner’s musical and literary style are treated in depth, as are the sources that throw light on both the man and his work. Chapters on orchestration and Wagner in performance are complemented by accounts of the reception and influence of his music. A detailed bibliography accompanies the most complete list ever published of his writings, speeches, open letters and reviews, as well as a glossary explaining the meanings and significance of Wagnerian terms, a calendar of his life and a Who’s Who of his contemporaries.

As an authoritative compilation of data and a much-needed corrective to common misunder­standings, The Wagner Compendium will change the way that its subject is perceived, and provides any music-lover with an inexhaustible fund of reference.

Barry Millington is author of the highly acclaimed Master Musicians Wagner, described by one reviewer as ‘an account of the composer’s life and career which is as close to the truth as we are currently able to get’ and by the then Controller, Music, at the BBC as ‘absolutely masterly’. Of his recent edition, with Stewart Spencer, of Selected Letters of Richard Wagner, The Sunday Times said: ‘the most important piece of Wagnerian scholarship to have emerged from Britain in the 20th century’. Barry Millington contributes regularly to many periodicals, including The Times and Opera magazine.

The Mozart Compendium
A Guide to Mozart’s Life and Music
Edited by H.C. Robbins Landon
With 30 illustrations and a map

Other titles of interest

The Metropolitan Opera Encyclopaedia
A Comprehensive Guide to the World of Opera
Edited by David Hamilton
With 380 illustrations, 62 in colour

If you would like to receive details of our new and forthcoming titles, please send your name and address to
Thames and Hudson
30 Bloomsbury Street, London wcib 3QP

The aim of this book is to provide a compendium of information on every significant aspect of Wagner and his music. The entire range of subject matter has been covered: the historical, intellectual and musical background; his acquaintances and contemporaries; his character and personality; his opinions and outlook; the sources from which our knowledge about him and his works is derived; his musical and literary style; orchestration and the performing of his music; and the impact of Wagner on both his contemporaries and posterity. There is also a chronological survey of his life, a full list of his prose writings, a comprehensive listing and discussion of the works, a glossary of Wagnerian terms and a section devoted to the mythmaking that has surrounded Wagner ever since he himself began to make notes for his future autobiography.

Within each section and sub-section of the Compendium we have endeavoured to present a digest of information representing the most up-to-date and authoritative thinking on the subject; the book is thus intended to be a handy reference tool rather than a work of literature. The emphasis throughout is on clarity and accessibility: the hope is that the Compendium (like its predecessors on Mozart and Beethoven) will prove to be useful to any general reader interested in Wagner or his music, as well as to the student and scholar, who will find information assembled here which would otherwise have to be culled from a variety of recondite sources.

With eighteen different authors writing on a subject as controversial, contradictory and multivalent as Wagner, a unified, consistent point of view is unlikely to be projected. Nor should it be. I have made no attempt to suppress opinions with which I disagree, or which conflict with views expressed elsewhere in the Compendium’, rather the plurality of opinion should be seen as a reflection of the richness of the subject. This should not be taken, however, as an abdication of the editor’s responsibilities. Indeed, an overall pattern does emerge from the various contributions which I hope will enable Wagner to be seen in a new perspective. What is common to all the contributions is a healthy scepticism about the Wagner cult, and a refusal to indulge in sentimental mythmaking, neither of which is necessarily inconsistent with affection and admiration for the music, or even with respect for the man and his achievement. The latter point is important, because it is my belief that for all the desanctification, cynicism and critical reappraisal to which the composer has been subjected over recent decades, the Wagner phenomenon remains more susceptible to dubious Pavlovian responses than that of any composer born outside Salzburg. It would be good to think that we might be ready for a more dispassionate, better-informed approach to Wagner that located him more objectively in the historical context of the igth-century Germany of which he was, according to Thomas Mann, the ‘perfect epitome’.

No composer’s life and work – least of all Wagner’s — lends itself to convenient pigeon-holing. A description of Wagner’s indebtedness to Otto Wesendonck, for example, could equally occur in the Who’s Who or in the sections under patronage, character, finances or publishers. Each such subject receives fullest treatment in the most appropriate section, with cross-references from subsidiary discussions elsewhere. It is hoped that the list of contents, the index and the system of cross-references will guide the reader swiftly to the desired information.

Bibliographical references have been kept to a minimum. They have not generally been included where an opinion has been generally accepted; rather they serve to indicate controversial opinions, or recently discovered, and as yet little-known, scholarly facts. Such references are shown as follows: ‘Coleman, 1991’, or, in cases where two or more publications emanate from the same year, ‘Dahlhaus, 1989a’.

Quotations from sources such as Wagner’s writings have with one or two exceptions (where they are revised versions of the standard Ashton Ellis translation) been freshly translated by the contributors themselves; again no attempt has been made to impose a monolithic unity on either the translation of oft-quoted phrases, such as ‘ersichtlich gewordene Taten der Musik’, or on the style of translation in general.

I would like to extend my warmest thanks to my seventeen co-authors for their patience and generous co-operation in the project and not least for their splendid contributions. In particular, I would like to thank Stewart Spencer, from whose unrivalled knowledge of matters Wagnerian the Compendium has immensely benefited: his punctilious reading of the entire manuscript has greatly enhanced its accuracy. Grateful thanks are also due to Ingrid Grimes, whose multifaceted skills make her the most sought-after proofreader in the business, and to all my friends and former colleagues at Thames and Hudson for their enthusiastic support and unsurpassed professionalism at all stages of the book’s production.