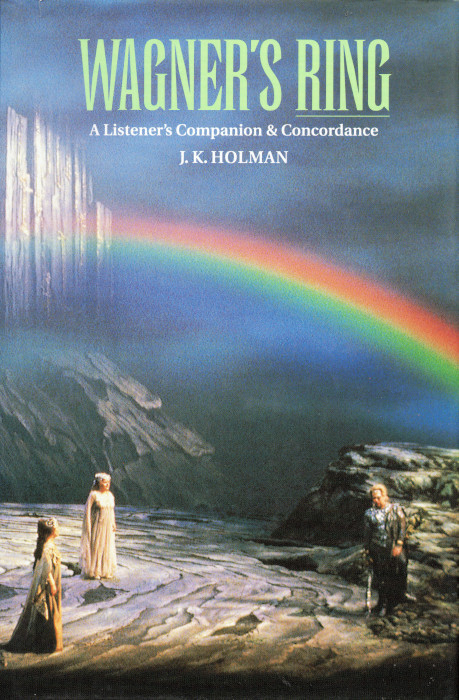 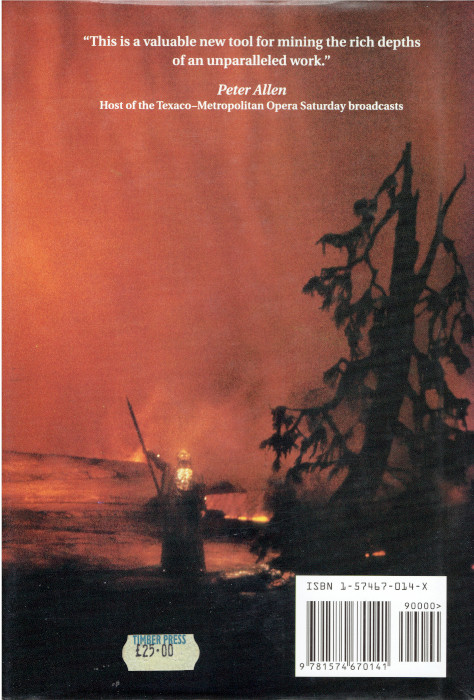 Foreword 9
Preface 11
Introduction 15
How to use this guide, with an overview of the major translations

CHAPTER ONE
Background 23
Mythological sources of the Ring operas, and the genesis of Bayreu

CHAPTER FIVE
Concordance 243
The first concordance to The Ring in English, an alphabetical listing of key words and of every appearance of each term in the four operas

Appendix 371
StagingThe Ring, a closer look at the motive Woman’s Worth, the chain of possession of the ring, and the characters’fates

J.K. Holman is manag­ing director of the Car­lyle Group, a merchant bank based in Washing­ton, DC, and serves on the board of trustees of the Washington Opera. He is an avid Wagnerite, and has attended many Ring cycles, including Bayreuth. He holds a B.A. and an M.A. in Middle-East Studies from Princeton and Harvard universities, respectively. He lives with his wife in Washington, DC, and has two grown children.

WAGNER’s Ring of the Nibelung is among the most influential and enigmatic works in the history of western art. Consisting of four separate operas—The Rhinegold, The Valkyrie, Siegfried, and Twilight of the Gods— the cycle requires at least fourteen hours for a complete performance, making it as demand­ing on its audience as it is exhilarating.

This book takes a comprehensive look at The Ring, exploring the mythology behind it and the story, music, characters, and Language of Wagner’s monumental work. Intended as both an introduction to The Ring and a power­ful reference tool, the book provides listeners, audiences, and readers with a basic guide to the four operas, answering the seemingly sim­ple questions asked by Wagner scholars and newcomers alike: who is who? and what hap­pens? The book contains extensive synopses with the composer’s stage directions, thus lay­ing out Wagner’s original intentions for staging the work. The book explores the heart of The Ring—the music—and vividly portrays the characters by mapping out their complex rela­tionships, their appearances in the four operas, and their mythological backgrounds. Probing beneath The Ring’s surface to its depths, the book will lead the listener to a greater enjoy­ment and understanding of this pinnacle of operatic art.

Finally, it includes the first English-language concordance to The Ring. A listing of key words and their appearances in each of the four operas, the concordance offers readers a pre­cise tool for studying the English libretto. Illus­trated with photos of stage sets and costume designs from a recent Metropolitan Opera pro­duction, and including a photographic and written survey of influential Ring productions since World War II, the book is an essential handbook for beginners and experts alike.

J. K. Holman is manag­ing director of the Car­lyle Group, a merchant bank based in Washing­ton, DC, and serves on the board of trustees of the Washington Opera. He is an avid Wagnerite, and has attended many Ring cycles, including Bayreuth. He holds a B.A. and an M.A. in Middle-East Studies from Princeton and Harvard universities, respectively. He lives with his wife in Washington, DC, and has two grown children.

For details on these and other titles, please contact

or, in the United Kingdom and Europe,

A FRENCH authority on Wagner wrote in the preface to his important new . book on the music dramas, “Of course I have not read all that has been writ­ten about Wagner—one human life would not suffice for that.”

His name was Lavignac, and he was writing in Paris in 1897!

Lavignac might have been both dismayed and delighted to learn that the great mass of books and articles he was referring to a century ago has become merely the tip of today’s iceberg. Yet I venture to say that the book you have in your hands now will prove not merely unique among all those works, but uniquely useful, in more ways than one.

As I sat down to write this brief foreword to the impressive manuscript that would become this book, I was shocked to realize that there had been a time when I had looked forward to—or, less ambiguously, anticipated—hearing my first perfor­mance of a Wagner opera with something close to dread. As a young player in string ensembles I had found playing in quartets, above all, to be the most satis­fying of musical experiences. Wagner seemed far removed from that world, and his reputation for massive works built out of something called leitmotifs was forbidding.

But I also recall that I enjoyed my first encounter with The Ring without being able to name a single one of those leitmotifs. And as I heard more and more of this revolutionary work, I knew that my pleasure in it would grow even greater if 1 could dig deeper into both the work and its background. Well, it happened that an invitation to write and narrate the Metropolitan Opera’s Ring cassettes en­abled me to spend large parts of three years immersed in this magnificent cre­ation and in the fascinating ways in which its creator achieved his miracle. The result was what I had hoped for, an even more intense—and lasting—enjoyment.

The key to that enjoyment was getting as close as possible to the composer’s genius—his thinking, his intentions, both in his drama and in his music. As Alexander Pope said in a sadly neglected couplet, “The perfect judge will read each work of wit, with the same spirit that its author writ.” For Pope, wit meant not so much cleverness as intellect—originally, wit meant “mind.” Indeed, his thought becomes different, clearer, if we read the couplet in the spirit with which it was written.

And this is not a matter of purism. I’d no more want to see the goddess Fricka enter, as Wagner indicated, in a chariot drawn by fake rams than I’d like to see Cleopatra played by the boy actors of Shakespeare’s day. Nevertheless, for me, the richest experience of The Ring comes with Wotan and Fricka in a mountain pass, not a spaceship, and the Rhine Daughters swimming, not sitting in easy chairs chewing gum, as I once saw them.

It is that striving for Wagner’s intentions that I enjoy so much in the Met’s cur­rent production and that I find so valuable in Jim Holman’s approach.

I do have one regret—that I did not have his book by my side as I was plung­ing into my Ring studies, although it will be good to have on hand from now on, if only for the decidedly helpful chapter on the characters and the wonderful con­cordance. In addition to Holman’s knowing surveys of the text, the music, the background, and the scholarship of The Ring, he enables us with those chapters to find quickly the various places in the opera where, say, Brünnhilde appears, or even that elusive character, Loge, or all the references to the sword or the spear.

In short, this is a valuable new tool for mining the rich depths of an unparal­leled work.